Mr Lloyd George was educated at Eton and Oxford University (MA).  He began his investment career in London in 1974 with Coutts & Co. Mr Lloyd George subsequently worked at the Paris Stock Exchange and at a major bank in Brazil.

Mr Lloyd George was previously Managing Director of Indosuez Asia Investment Services in Hong Kong from 1984, launching the first closed end country funds for Thailand, Indonesia, Philippines, China and India. In 1978, he joined the Fiduciary Trust Company in New York to work on international investments for the UN Pension Fund.

In 2015, he established Lloyd George Management (HK) Limited to build on his forty-year track record of investing in Emerging Markets.

Mr Royds started his career in London in 1986 as a Eurobond dealer, in which capacity he worked in Hong Kong from 1988 to 1990. In 1990, Mr Royds joined Schroder Securities, initially on the convertible and derivatives team in London, and subsequently as an Asian equity salesman in New York. In 1996 he joined ABN AMRO, returning to London in 1997 as Head of North Asian Equity Sales. In July 2000, he was transferred to Hong Kong where he was later promoted to Global Head of Asian Equity Sales. He left ABN in 2005, before joining Lehman Brothers in 2006 as Head of Asia and Japan Client Account Management. Mr Royds has a BA in Economics from the University of East Anglia.

Justin Chan joined Lloyd George Management (HK) in July 2015, having interned at Lloyd George Management in 2012. His main focus is to generate investment recommendations for Hong Kong. Previously, Justin worked at Tocqueville Asset Management in New York, an investment firm with $13bn under management. As an analyst with a focus on U.S. equities, Justin assisted in the management of major discretionary portfolios for the Chairman. Justin was educated at Eton and graduated from Middlebury College, VT with a BA in Economics and Philosophy. 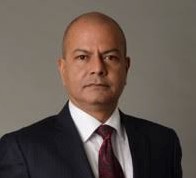 He is responsible for portfolio strategy, portfolio construction and risk management.  He joined Lloyd George Management from Conning Asia Pacific Limited, Hong Kong, where he was Chief Investment Officer, Asia Pacific. Prior to that he spent 20 years with ING Investment Management Limited in various roles in New York, Luxembourg and Holland, moving to Hong Kong in 2004 as Head of Asian Equity Investments.  During his long career in investments he has worked as an Economist, Analyst and Investment Manager across Asia and Global Emerging Markets. His first job was with the World Bank in Washington DC as a Consultant Financial Analyst.

Bratin holds an M.B.A. and Ph.D. candidate in Finance from Rutgers University, New Jersey, USA.  He also received a Master’s and Bachelor’s Degree in Physics from the Indian Institute of Technology, Kharagpur, India.